Introduction:
We developed a new device for freeze drying of cells and tissue. The device can be sterilized before use by autoclave. The device is built of a stainless-steel cylinder having a condenser and a vials carrier incorporated with temperature control unit and is cooled by liquid nitrogen. The cylinder is connected to vacuum pump and it can be equipped with a vial closing system. We freeze dried human sperm cells in the device and tested the concentration and DNA integrity before and after rehydration.

Freeze-drying: The vials were opened, in sterile liquid air and placed in the LyoLife™ lyophilization device. Prior to use the device was sterilized using an autoclave. Pressure was set to 10mTorr, shelf temperature was -35°C and condenser temperature was set to -110°C. We dried the sperm for 48 hours.

Rehydration: Dried droplets (20) were directly exposed to 0.2ml of α-MEM Eagle medium pre-warmed to 37°C or to 0.2ml of warm LyoS. Sperm cells were evaluated for concentration and at least 200 sperms were evaluated in each group for DNA integrity with the Halosperm G2 Kit.

Conclusions:
The LyoLife device allows for successful freeze drying of sperm in a sterile manner. Rehydration with LyoS was better than with medium resulting with no significant cell loss and no additional DNA damage. The dried droplets may be directly introduced into the culture medium for rehydration and used for IVF, mainly ICSI, without any need of sperm pre-washing. 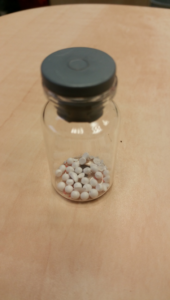